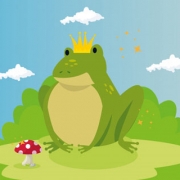 The book tells the story of George, a young Prince of the Kingdom of PEACEBURGH, who is forced into a marriage he does not want with Princess Stephanie of the terrible Kingdom of HATEBURGH, ruled by the violent King Vladimir. King Vladimir’s intention with this marriage was the union of the Kingdoms of PEACEBURGH and HATEBURGH in order to conquer the rich and peaceful Kingdom of LOVEBURGH. Prince George does not accept this condition and curses that he would rather become a frog and disappear into the great lake of the castle. The curse witch listened and answered his request. At the lake, Prince George had moments of great joy, won sincere friendships, such as that of Frog Croc, and felt so good that he would not want to be Prince again. Everything was fine until he saw that the lake was not so calm and safe. The dreaded Goliath Frog, who swallowed frogs who did not obey her, decided that all frogs should invade the peaceful, rich neighboring lake. Croc, by example of determination and courage, led a movement against Goliath Frog, showing Prince George, called Toad by Croc, how cowardly and timid he was at facing problems in his own Kingdom. Breaking the curse and returning to Princehood was thanks to a true kiss of love from Frog, a friendly little frog who was, in fact, the castle maid Suzy in love with the Prince and who had been accidentally transformed in frog by the curse witch. Prince George led his people to resistance against King Vladimir. The story ends with a lesson given by the people of LOVEBURGH who helped the Kingdom of PEACEBURGH overcome the Kingdom of HATEBURGH. Defeated King Vladimir cursed and the curse witch turned him into a frog as well. But his fate on the lake was sad. The new King George finally marries Suzy, the maid. 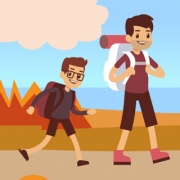 The book tells the story of Hans and George, father and son lovers of all manifestations and beauty of nature. Hans always dreamed of being a Boy Scout and his son Jorge followed the same dream. In Scouting, both learned important foundations and principles of life that added to the enhancement of personality and moral values. In parallel to their activities in the Boy Scout group, Hans and Jorge set out on adventures that brought them a lot of life experience. The book helps the child to forge his life values, his ethical and moral principles, his spirit of love and mercy for others, very important principles that will add to the formation of the human being, the child and the professional. It is a tale with an educational and knowledge development, while engaging and enchanting readers, as well as guiding and encouraging them to this healthy scouting activity.

The book tells the story of the YELLOW KINGDOM, a kingdom where wealth was not gold, silver and precious stones. The wealth was in the production of corn produced with abundance and quality. The kingdom was governed by King Edward and Queen Silvia. The kingdom was very prosperous, and everyone lived a good welfare. King Edward was very human and fair and had the loyalty and dedication of all his subjects. The royal couple had two children – Princess Lidia, loved by her subjects for her social work, and Prince Claudius, arrogant, insensitive, and
hated by his subjects, who just had fun and had no useful or productive activity. With the death of the royal couple, Prince Claudius becomes the new king. And the Yellow Kingdom underwent terrible transformations under his reign, and the subjects knew what poverty and suffering were. The new king no longer encouraged the production of the kingdom’s greatest wealth, maize, and spent the accumulated wealth in the silos. When the stocked corn ran out, he found himself in poverty. Finally, the new king was forced to sell the castle to a hard-working, persevering peasant, who made a fortune by planting the twelve grains of corn received as alms from the once arrogant prince. This peasant bought the castle, married Princess Lydia, who was proclaimed the new Queen of the YELLOW KINGDOM. And peace and prosperity returned to the kingdom. As for the now subject Claudius, the story holds a surprise at the end.