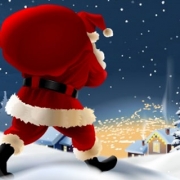 The book tells the story of the day Santa Claus felt obliged to take a special trip after Christmas to fulfill the request made by a poor child. After a short holiday after Christmas, Santa Claus began preparations for toy production for the upcoming Christmas. He was aided by the elves and they all work in the secret village of Santa Claus in Lapland, Finland. Seeing the mail in the inbox, Santa Claus was surprised to find a letter that had been hidden at the bottom of the box. It was a request from a poor child. As a gift he asked for a bicycle, notebooks and pencils to study. He lived in a small house in the backcountry, far from school and could not attend classes like the other children. Santa Claus has agreed to pay a special visit to the poor boy, even though it is not Christmas, causing a stir and many surprises among the children and adults who have seen his sleigh with the reindeer pass like a comet in the sky bound for the poor boy's house. Completed his mission, Santa Claus returns to his home for his well-deserved vacation. The boy was able to start his studies in time thanks to the new off-season gifts from Santa Claus.